Today we are going to be comparing the barbell biceps curl to the cable biceps curl to finally determine which is BEST for building BIGGER BICEPS. So, how do you determine how effective an exercise is?  I mean, at the end of the day lots of people have built AMAZING physiques training in very different ways. So the only way YOU will be able to understand my choice is to first understand the anatomy of the biceps.

Anatomy Of The Biceps

First off, the biceps is a two-headed muscle (bi-cep) that mainly controls elbow flexion and forearm supination. However, those of you who have been watching my videos for some time also know that the long head of the biceps (or the outside head) actually crosses the SHOULDER joint and controls shoulder flexion to a degree. So this means that NOT ALL arm curls are identical in terms of muscle size and strength. Yes, any exercise you choose will incorporate some sort of elbow flexion but it’s actually the position of your elbows in space that will determine which head of the biceps is emphasized the most, as well as which part of the range of motion you’re getting stronger at and not too many people think of this.

What I mean is that an incline dumbbell curl might look the same as an overhead cable curl but in fact, they are fundamentally opposite. And that’s because the incline dumbbell curl will position your elbows behind your torso (so there will be shoulder extension) and thus it will emphasize the STRETCH of your biceps throughout the range of motion. On the other hand, you have your overhead cable curl which will position your elbows in front of your head (so there will be shoulder flexion) and thus, it will emphasize the CONTRACTION of your biceps.

Therefore, it really matters which exercises you decide to incorporate in your workouts, especially considering that each one of us has different goals, different weak areas and lagging body parts we may need to focus on. So, now that you know a bit more about the biceps, let’s talk about the exercises beginning with the BARBELL BICEPS CURL.

I want you to think of the barbell biceps curl as the grand-daddy of all bicep exercises. In fact, it’s probably the FIRST biceps exercise that was ever invented, most likely around the same time we started styling our hair!  Therefore, it’s a very difficult exercise to TOP in terms of potential gains so let’s first compile a list of pros and cons of the movement!

PRO: Holding the barbell Forces your arms into supination at the bottom, or STICKING POINT, which activates your biceps to a MUCH greater degree. And if I am being honest, this is why I get so angry when I see “trainers” demonstrating half hammer to biceps curls. Forearm supination is one of the three functions of your biceps and skipping it is just as terrible as doing half reps on the bench.

CON: Forcing your arms into supination can be hard on your wrists, especially if you have poor wrist mobility. The solution would be to work on your mobility and maybe even try to stretch your wrists between sets (hands together going up and down). This isn’t the kind of pain you want to AVOID.  It’s the kind you want to FIX…or else it will just get worse.

PRO: You can overload with MUCH heavier weights than any other biceps exercise.  Especially when compared to dumbbell or cable exercises. With a barbell, if you need to, you can use a bit of momentum to force out some super heavy reps. Now, you CAN do the same thing with cables but when the weight gets REALLY heavy it starts to get a bit awkward due to the fixed position of the cable.

CON: Because you can cheat easier with a barbell, this will give beginners who don’t know better EVERY opportunity to cheat curl and possibly injure themselves. I see it a lot in my gym. New lifters using their legs, hips, lower back, and shoulders to lift weight that they’re not ready for.

Now that we know the pros and cons of the barbell, let’s compare it to the cable version and see, if given the option, which one is best suited for MORE GAINS! 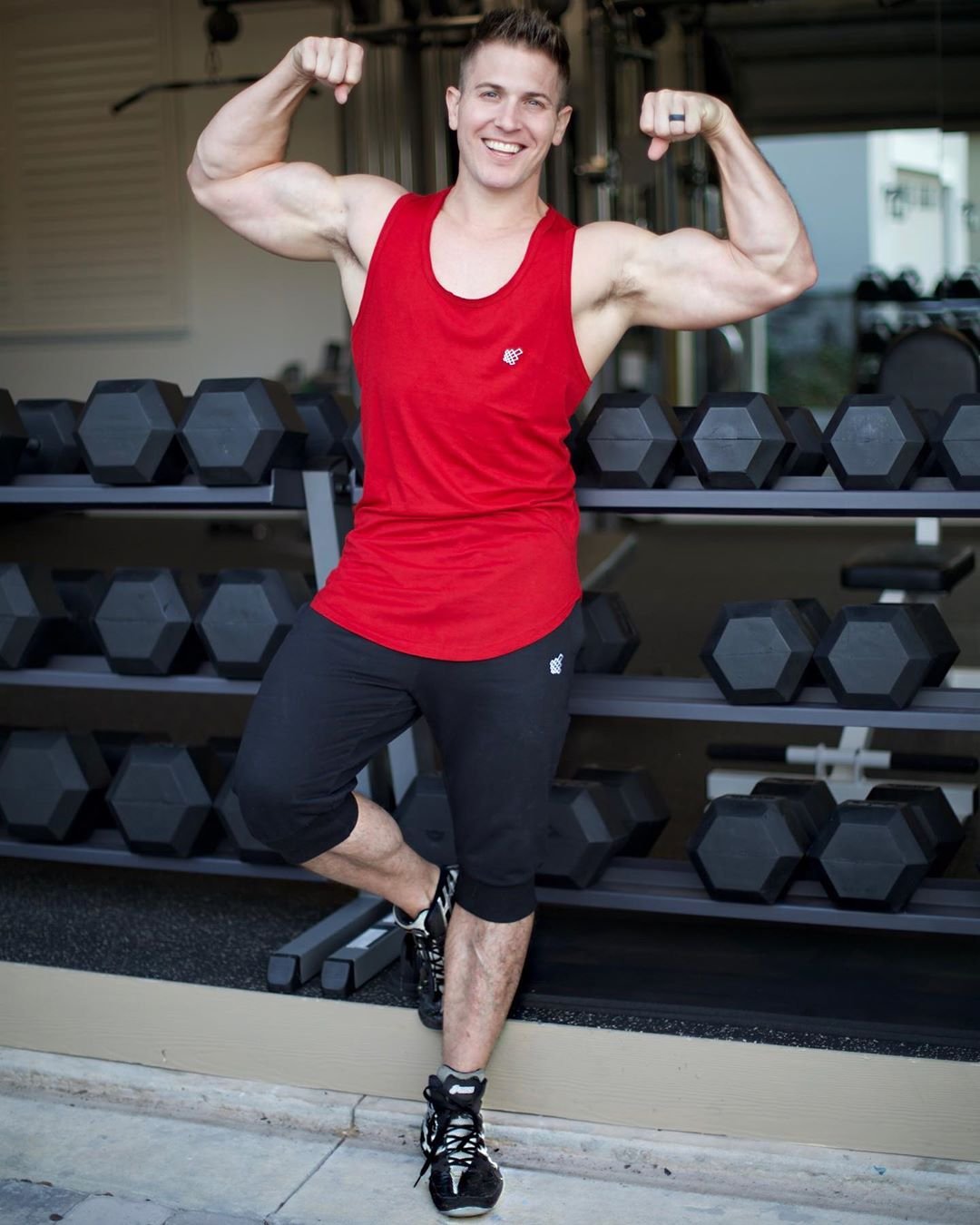 PRO: Once in the starting position there’s constant tension on the biceps throughout the entire range of motion. And because of this the strength curve is much different when compared to the barbell curl. For the barbell curl, it’s harder at the bottom and gets progressively easier as you reach the top of the ROM. With the cable curl though, the difficulty remains the same from start to finish.

CON: You can’t really overload with this exercise. Sure, you can become progressively stronger over time, but the cable curl doesn’t really allow you to handle really heavy weights. This is because most cable weight stacks don’t go high enough in weight and using momentum to push through the concentric phase of the movement can be very difficult and awkward when compared to the barbell curl.

PRO: If your workouts are getting boring, the cable curl will give you the opportunity to introduce variety in your training. With the barbell curl, you have just that; a barbell curl! But with cables you can drop the pulley all the way down and perform a standing cable curl. You can raise the pulley to the top, sit chest down over a bench and curl over your head. You can lie on the floor and curl towards your forehead.  You can even sit and do that thing where your elbows are pinned to your thighs and many more exciting opportunities to curl probably exist that I don’t even know of, but belong in a future episode of INSTA-GAHHHBAGE!

CON: You need a cable station and not everyone has access to one, especially if you’re training at home. Now you ‘could’ substitute the cable for high-tension bands, but it’s not the same and in my opinion not worth the effort. For this reason, the cable curl serves a much better role as a finisher in any given biceps workout. Now that we’ve gone over the pros and the cons for both movements, I think it’s pretty obvious what the better choice is. But at the same time, not always black and white and this is one of those cases.

Sure, if you ONLY had time to perform ONE biceps exercise I’d go with the standing barbell curl even if I had access to a cable station. Why? Because it allows you to utilize heavier weights, progress easier over time and because I can overload more with heavy negatives, I personally feel a lot more biceps activation when compared to a cable curl.

Now some of you might point out that I mention that when cable curling there is constant tension during the entire range of motion. So that should be better right? Well, also remember this. You are always going to be about 40% stronger in the eccentric of any exercise and that is where the most muscle damage for regrowth happens. So to put it simply, you will never be able to CURL UP what your biceps can max out on the way down and this is why the overloading is so important. You might not be able to curl say 135lbs for reps, but if you used my CHEAT & RECOVER method, you could still reap the benefits of maxing out the overload on the eccentric portion of your curls.

Now, does this mean the cable curl has NO PLACE in your workouts? No, not at all!  In fact, now that you have a bit more knowledge of the anatomy of the biceps you can use the different elbow positions that the cable curl offers to focus on either the FLEX (high) or STRETCH (incline curl) portion of the movement.

I also like to at times end my biceps workout with a big drop set finisher which is MUCH easier to execute using a cable machines because of how easy it is to drop the weight after each set.  And another great way I like to utilize the cable curl is for when I have clients that are having a hard time establishing mind-muscle connection to their arms. The constant tension along with ‘flexing’ as they curl will definitely help improve their ability to train their biceps properly. But even so, I would have them use light weight and treat that as a warm-up before moving into heavier barbell curls.

I want to leave you with a new biceps workout to try out!

You can do this workout on your arm day, combine it with back and shoulders, chest day, it really doesn’t matter!

How To Practice Self Care At Home